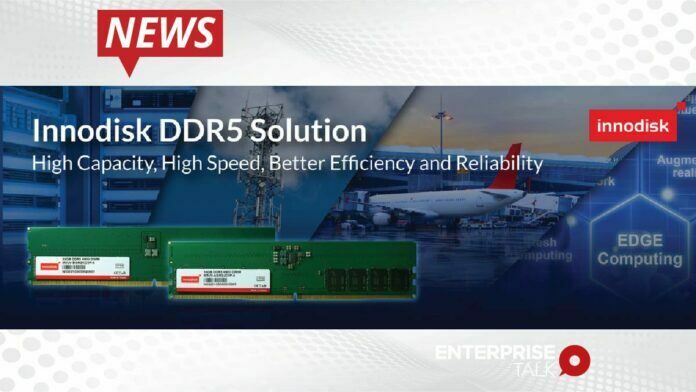 Innodisk officially announces the launch of its DDR5 DRAM modules developed for the industrial sector. The new standard offers a number of fundamental performance and energy-saving improvements over its predecessor, and expectations have been high since it was officially announced. Presenting a host of benefits, including the imperative speed and storage gains, DDR5 memory will eventually take its place as the memory of choice.

DDR5 also has a theoretical maximum transfer rate of 6400 MT / s, which is twice the rate of DDR4. Meanwhile, the voltage has been reduced from 1.2V to 1.1V, which reduces the total power consumption. Another important structural change is that power management is done directly at the DIMM, reducing redundant power management circuitry on the motherboard for unused DIMM slots.

On the other hand, the change in the DIMM architecture, which is now dual channel, is also significant. For DDR5 memory, each DIMM has two 40-bit channels (with 32 data bits and 8 ECC bits each) for the same total data with more ECC bits. Two smaller independent channels improve memory access efficiency, so higher speeds are achieved more efficiently. Innodisk currently offers DDR5 memory with capacities up to 32GB and speeds up to 4800 MT / s.

Less than a year after the release of the DDR5 specification, its early adoption should occur in the fourth quarter. “Our customers are excited about the potential that DDR5 memory has to accelerate their application development,” said Samson Chang , corporate vice president and general manager of the server and embedded DRAM modules global business unit, at Innodisk.

He added that “Innodisk brings high-quality products to the industry by introducing new DDR5 DIMMs with original integrated circuits, anti-sulfur, heat dissipation and coating technologies in accordance with the industry-level reliability expected of us.”

Hyperscalers are probably the first to use this module, but in the long term most industries should feel the benefits of DDR5 in 5G networks, deep learning, AI, edge computing, smart medical services, supercomputing and mission critical applications.

Sandvine Extends its Relationship with TELUS through Multi-Year Deal