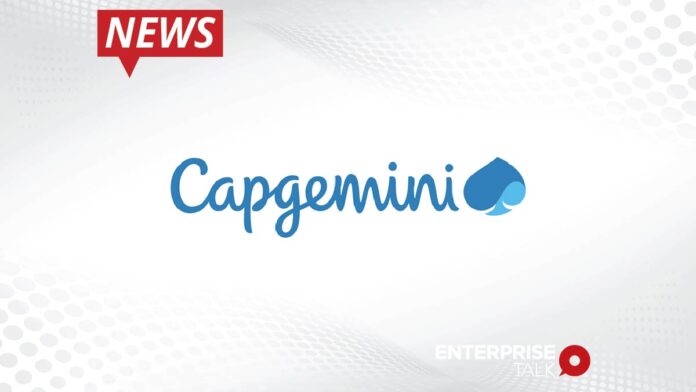 In support of its long-term commitment to innovation and technology, Capgemini announces today a three-year global partnership with Nobel Prize Outreach to support innovation and science, in line with Alfred Nobel’s vision and legacy to honor achievements “for the greatest benefit to humankind”

Capgemini joins the select group of Nobel International Partners, five companies that are all fueled by the same commitment and passion to share knowledge and excellence globally, to inspire people across borders and generations to engage in science, and to shed light on some of the greatest challenges of our time.

“Capgemini and Nobel Prize Outreach share the same vision of innovation as the foundation of a more sustainable and inclusive future for all,” says Aiman Ezzat, CEO of Capgemini. “I am looking forward to this opportunity to us joining forces to support research and innovation, to inspire more people all over the world, and turn ideas into action.”

“This partnership with Capgemini will allow the ideas and knowledge that have been recognized and awarded by the Nobel Prize to reach a wider audience,” says Laura Sprechmann, CEO of Nobel Prize Outreach. “To take on our time’s greatest challenges we need to strengthen the ties between the business community, policy makers and the science community.”

The Nobel International Partner program is run by Nobel Prize Outreach which role is to spread knowledge about Nobel Prize-awarded achievements and stimulate interest in science, literature and peace in line with Alfred Nobel’s vision and legacy. The organization reaches a global audience of millions through its high quality productions within broadcast and digital media which includes the official Nobelprize.org website and podcast, the Nobel Prize Concert, as well as a series of intercontinental, inspirational lecture events featuring Nobel Prize laureates.

As a Nobel International Partner until at least 2024, Capgemini will leverage its deep expertise in innovation and technology to support a rich program of outreach events across the globe comprising in-person and digital formats. In particular, these include the Nobel Prize Dialogues – regular events that bring Nobel Prize laureates, scholars, students, inventors, decision makers and other great thinkers together with the public, to discuss solutions to some of the world´s most pressing issues.

These events aim to promote fact-based decision-making, stimulate dialogue and inspire students, researchers, and decision makers worldwide to build an inclusive and sustainable future fostered by innovation. This exclusive partnership embodies Capgemini´s focus on supporting world-class education and training and to contribute to the emergence of the world leaders and talents of tomorrow. The next Nobel Prize Dialogue will happen in Latin America on November 16. Entitled “United by Science”, this session will bring together five Nobel Prize laureates and 80 students from across the Latin America Region and the Caribbean, and will explore how science and scientists can most effectively make a positive impact on society. This online event will be accessible publicly.

CIO Leadership: Three Ways the Role will Evolve in 2025