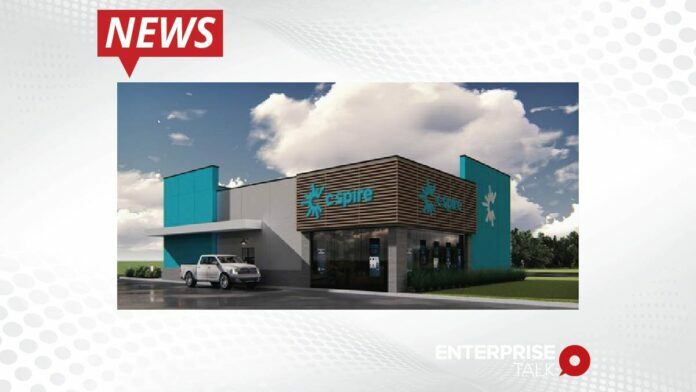 The store, which is located near the U.S. Interstate 55 North freeway frontage road at 4864 I-55 North in Jackson, has been open for business since Monday, November 1 at the new location.

Store employees, community and business leaders and elected officials kicked off the grand opening at 10 a.m. and the location will feature giveaways, C Spire branded items and limited-time deals to commemorate the day, according to Craig Jackson, general manager of the company’s wireless services division.

“We’re excited to bring this store online as the layout is truly next generation with our first drive through window for same day curbside pick up orders and state-of-the-art security features for our staff and customers,” Jackson said. “Shopping should be exciting, focused and help consumers get what they want quickly and efficiently. This store accomplishes that goal.”

Jackson said the store also will have built-in stations with information and details on other products and services the company offers, including its game-changing fiber-based broadband internet and smart home and business services for consumers and enterprises.

Special offers include the iPhone 13 or iPhone 13 Pro for $5 a month with a qualifying trade in on C Spire’ Everybody Deals plan. Another limited time offer features the iPhone 12 free with a qualifying trade in on the Everybody Deals plan. Visit the store between 10 a.m. and 7 p.m. to explore more deals and offers from C Spire.

Local business and government leaders praised C Spire for its continuing investment in the Jackson metropolitan area and for investing in the new retail location.

“C Spire is a great community partner and its continued confidence in the retail viability of local markets is an encouragement to all of us involved in promoting the growth and development of our regional economy,” said Jeff Rent, president and CEO of the Greater Jackson Chamber Partnership, which represents businesses with over 200,000 workers.

“We’re looking forward to this new business serving as an anchor in north Jackson,” said Ward 1 Jackson City Council member Ashby Foote. “C Spire has been a long-time partner in the economic growth and vitality of the city and this new store represents a much-needed shot in the arm.”

The Route to a Hybrid Workplace through Digital Transformation