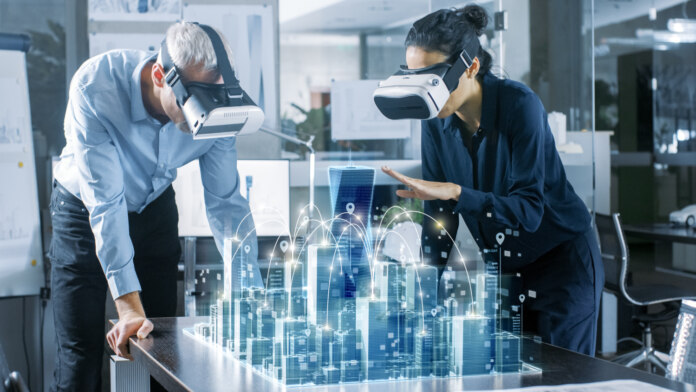 Since the first time I tried on Google Glass, in 2013, I have been intrigued by AR. I’ll admit, seeing information floating in my vision was initially disconcerting, but then I found it compelling. To have it presented to me, as and when I needed it, was a revelation. Due to the combination of several technologies coming to market and one almighty world event, I’m now convinced AR’s time is fast approaching.

The future is remote!

In a 451 Research survey conducted in March 2020, 38% of enterprise businesses stated that working from home will be a permanent policy once the pandemic has passed. Similarly, a Gartner survey of CFO’s showed 74% would be keeping portions of their workforce as remote employees long-term or permanently.

When you abstract ‘work’ from a specific geographic location, it has a significant impact on society. The 2020 pandemic is forcing this change quicker, and pushing it over a tipping point – as more and more people become used to, and then require, remote working to be the standard modus operandi.

Imagine the impact on commercial real estate in cities. Many businesses will no longer need big, expensive offices in city centers, and this reduced cost burden will become a competitive advantage in their market, driving others to do the same. Remote conferences will also become increasingly de rigueur. O’Reilly has already moved permanently to an online-only conference business, and Facebook has said that all of its large events are online only until at least the middle of 2021.

AR in a post-office world

As well as all the existing uses for AR, such as assisted maintenance, mapping (GIS), etc, there will be emergent uses for it in the ‘post-office’ business world.

Good communication is a mixture of words, tone, and body language. All three are needed to get the full message and context across. With remote working, there is an increasing need to communicate with clarity more than ever, since text alone doesn’t cut it, and video calls lack the depth and vibrancy of reality. This is driving the need for compelling “in the room” experiences, both in work and personal lives.

This is where Augmented Reality starts to shine. You could bring the meeting room to you with all of the rich context and tone of a real-world meeting, and none of the drawbacks. AR meeting rooms, with your colleagues all talking around the table, with shared AR whiteboards, even AR screens to conference-in those who are stuck in the old, 2D world.

Once AR becomes widely adopted in one aspect of people’s lives, the ubiquity and usefulness will enable it to flourish in all other aspects of life.

Step changes happen when several emerging or existing technologies are brought together, in a new way, to form something more significant than the sum of their parts.

Machine Learning, for instance, impacts AR by processing inputs, prioritizing, and providing recommendations and limiting information overload to an AR wearer; lidar gives it a 3D understanding of your surroundings. At the same time, 5G enables untethered bandwidth in a data-anywhere world.

Imagine AR’s use in retail – we would see the rise of the AR showroom, rather than a physical store or just a flat webpage. As a way of heightening desire in prospective customers, it’s a seller’s dream, and for the AR user, it provides personalization and the ability to ‘try before you buy.’ There are plenty of uses in all fields – from assisting in surgery to helping hone your sports skills – the world is your digital oyster.

But for all this to work, what has to happen behind the curtain? The visual data that is collected and transmitted needs to be processed enriched and analyzed – often in near real-time. The lidar information also needs to be processed and mapped out. The ML recommender systems need to use all of this, combined with other data sources such as GPS, to give you timely feedback in your AR rig – all through a streamlined application UI (that is not distracting or overwhelming).

AR is also the gateway to future technologies, such as authentication using iris patterns to unlock physical devices, as well as online objects or payments. Why has a big screen TV cluttered up your room when you have a display as big or small as you want in your vision? And, when combined with a lidar sensed and AR visualized virtual keyboard, why do you need a tablet or a laptop? Other than for lugging a strong processor, a wifi/5G data link, and battery around. But you already have a device in your pocket that can do all of that – and they are getting more efficient and more powerful year on year.

The Advantages of Taking Print Management To The Cloud

What the Zoom Deal Tells Us about the Future of Work

The Dividing Line between Human and Robotic Behavior Is Becoming Blurred